The “Dark Side” of Jewellery Making and the work of TARA Projects (Trade Alternative Reform Action), Delhi, India.

TARA Projects was founded in 1973 by an ex-Indian Army officer & professor called Shyam Sharma to help poorly-organised artisans in Delhi.

Professor Shyam Sharma showed his commitment to
“Trade Alternative Reform Action” by travelling from village to village around Delhi and providing loan funds & skills training to a few small marginalised communities in the un-organized, home-based sector.

Encouraged by its initial success, the project gradually extended its socio/economic and trade reform activities.

By creating markets & avenues of economic growth for these struggling, economically disadvantaged craftsmen & women,
TARA help to generate steady work and income.
The organisation now enables hundreds of artisans to sell their products to international markets – including the UK.

TARA’s mission is to practice fairness in its production and trading activities for the development
of the grassroots and the other marginalised sections of society.

In India, most jewellery is produced by small artisan groups.
These producers are unable to negotiate a fair price for their work and are often taken advantage of by “middle-men”.
TARA Projects has led the way in protecting and supporting small groups of artisans so they are not exploited or paid poorly.

Making jewellery is a major business in India, but there is a “dark side” to the industry:
the reality is that much of the inexpensive jewellery you can buy on the UK high street is made using child labour.
It is used because wages are much lower than adults’ wages – and small hands are better suited to creating intricate jewellery pieces.
Often jewellery workshops are owned and run by former child labourers who have known nothing else in their lives.

Shyam Sharma, the founder of TARA believed that Fair Trade could improve the lives of artisans
living in poverty while also protecting children from exploitation.
TARA Projects supports small artisan groups by empowering them economically and helping them sell their products
for a fair price.
TARA Projects uses design as a tool for this development.

“We believed that fairness in trade could bring prosperity and peace in society.”

TARA`s understanding of the problems…

“Poverty is not only about shortage of money. It is about rights and relationships.
About how people are treated and how they regard themselves.
About powerlessness, exclusion and loss of dignity.
Yet the lack of an adequate income is at its heart…”

TARA have now been able to expand their work to a 120 mile area around Delhi.
They fund informal and vocational schools as well as literacy centres for adults
and campaign and educate people about Fair Trade in order to end injustice and manipulation in the world mass trade system.

TARA Projects employs only adults and ensures that their artisans earn more in comparison to others doing similar work outside of the organisation.
Artisans also enjoy access to better working conditions, savings schemes, health facilities and opportunities for training and ongoing support.

TARA Projects supports an education programme for child labourers.
Currently more than 1,100 children are provided with a free education and support to escape from exploitation and poverty.

Although there is “Right to Education” in India, it is still challenging to implement for all.
Child labour is prevalent in many parts of this enourmous country.
TARA therefore implements various programmes to ensure an education for marginalised children
in the form of informal learning and vocational training centres which benifit members of the respective artisan communities
as well as the general public.

Access to health care is one of the biggest challenges in India – especially for underprivileged people
as there are no adequate health facilities available.
TARA supports affordable health care programmes for these marginalised people, particularly artisan’s communities
and they are provided with free health insurance and health education.

Over the years, Tara has extended their services to reach over 500 artisans in several states in India and this work is continuing thanks to customers in the UK and elsewhere.

TARA is working with artisan communities to generate sutainable livelihoods based on handicrafts in the following areas:

1/ Bawana, a census town in the north west district of Delhi.
Most of the inhabitants in the area are migrants from Madhya Pradesh, Bihar and Orissa and used to live in urban slum areas of Delhi.
Due to the government polices the slums were demolished and the people relocated & given 18 yards of land on the outskirts of the city.

3/ Pataudi, a small town in the state of Haryana (60 km away in the west of Delhi).
The population of Pataudi consists of both the Muslims and Hindu communities.

Tara has been involved in many actions to preserve the environment, with special focus on water conservation and plantation. 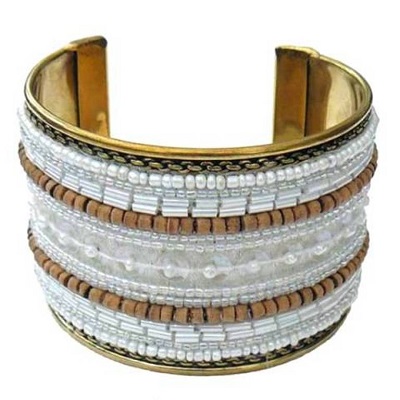 Thanks for reading this post – Paul.
You can continue to support this good work by purchasing Fair Trade items through our website.
Our gorgeous brass cuff with tiny white and wood beads has been hand-crafted by Fair Trade artisans from TARA Projects.