What is The Hamsa Hand?

The Hamsa Hand is an ancient Middle Eastern palm-shaped amulet symbolising the “Hand of God”.
It depicts the open right hand.

It is also popular in northern Africa, but in all faiths it is a protective sign.

The Hamsa Hand – The Evil Eye

One style is shaped like a regular hand and the other has two symmetrical thumbs, which is the most popular.
The wearer of The Hamsa Hand can wear it facing up or down and it is believed to give the owner
happinss, health, luck, good fortune, success, harmony and protection from the “Ayin Ha’ra,” – also known as “The Evil Eye”.

The “evil eye” is a curse, believed to be cast by a malevolent glare, usually given to a person when one is unaware.
Historically, it dates back to the Greek classical antiquity of 6th century BC.

So it’s a “look” or “stare” and is believed to bring bad luck for the person at whom it is directed for reasons of envy or dislike.
In short, it is a talisman or amulet, designed in the shape of an eye, that indicates spiritual protection. It can be seen in these artwork examples… 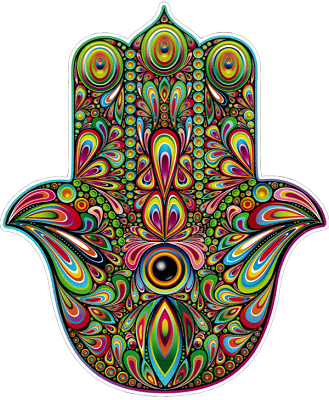 The word “hamsa” derives its name from the 5 fingers on the hand.
In Hebrew, the number 5 is “Hamesh” and the 5th letter of the Hebrew alphabet is “Hey” – one of God’s holy names.
“Hamesh” is representative of the 5 books of the Torah.
In Judaism, it is also interpreted to be “The Hand of Miriam” and symbolic of the owner’s 5 senses in an effort to praise God.

In Arabic, it is “Khamesh”. In the Sunni culture, the Hamsa is associated with The Five Pillars of Islam.
For the Shi’tes, it symbolizes the Five People of the Cloak.
In the Islamic faith, it symbolizes as “The Hand of Fatima”, who was the daughter of the Prophet Mohammed.

The Hamsa Hand – The Evil Eye in Black and White

The Hamsa Hand has a wide variety of different spellings which include hamesh, hamsa, chamsa and khamsa.

Nowadays the symbol is popular in jewellery making, such as this Hamsa Hand pendant on a long gold-coloured necklace. 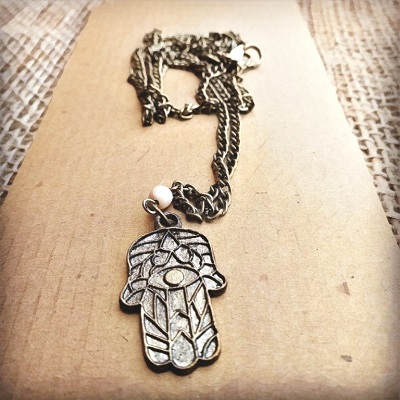 Thanks for reading this Blog post.
Do you have anything to add?  Do you wear an amulet yourself?
Share your thoughts in the Comments section below – Paul